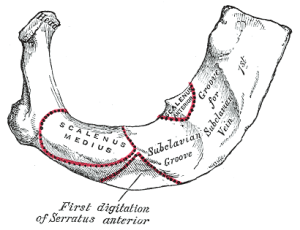 In the spirit of understanding the reciprocal relationship between structure and function I am going to take on some quick overviews of anatomical parts while using the work of Marion Clark, DO, to guide the discussion.

A quick note, Marion Clark, DO, wrote what is arguably the most important anatomy/physiology texts of all time. Why don’t people know about him? Probably because his book came out in 1906 amidst the political climate that brought about the Flexner Report in 1910.

As a quick overview, the muscles that attach to the first rib are: subclavius, anterior scalene, serratus anterior, middle scalene, and levator costae. The job of these muscles is either to fix the rib in place or draw it upwards. As is visible by the amount of muscles that attach to the first rib, there are a few different ways to get to it (when one isn’t working, go after another one).

Due to the relationship with the clavicle, the first rib has a great affect on the lymphatic drainage of the entire body via the thoracic duct and the right lymphatic duct.

– Pain in the arm and along the first intercostal space.

– Functional disturbances of the heart (via nervous connections including the vagus nerve as it passes between the subclavian artery and vein).

– Lung and bronchial disturbances (more common than heart disturbances) due to the nervous connections.

– Disturbed vasomotion to the head and face via disturbances to the gangliated cord.

– Throat issues due to the inferior cervical ganglion and its connection with the laryngeal nerves (often creating a hacking cough).

– The thyroid gland is often disturbed through the connections of the stellate and inferior cervical ganglia by way of altering the vasomotion leading primarily to congestion and hypertrophy (the rib impinges and causes facilitation to the nerves leading to increased blood flow).

Considering the above noted conditions it is clear that proper articulation of the first rib is very important. Due to the nature of the articulation, attempting to “lower” the first rib may not be appropriate. Instead it is more likely that removal of the contracture of the muscles on the superior surface (neck muscles) is a more appropriate methodology for relieving a dis-articulated first rib. It is also vitally important that the clavicle be lifted from the first rib to ensure that the structures beneath it are not obstructed. For students of the CAO, this is usually accomplished through the 3 cardinal arm movements. For anyone else reading this, consider that the head, face, neck, heart, and lungs can all be directly affected by the first rib.