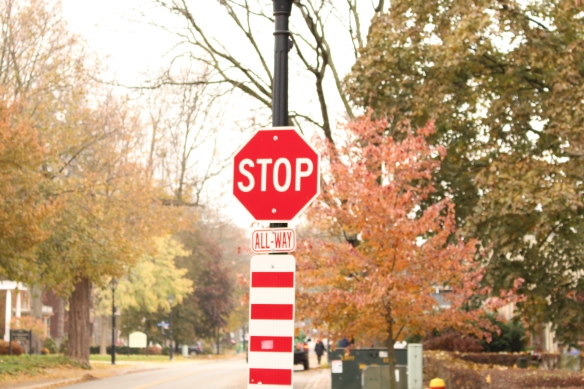 That doesn’t make sense! To make obvious what just happened between the title of this article and the first sentence watch this clip from Anchorman (it is crass humor):

There is a phenomenon I am hoping to highlight that connects to the above clip very loosely (due mostly to my personal sense of humor which is not a requirement in order to understand the point here).

There is a concept that is presented by Malcolm Gladwell in his book “Blink: The Power of Thinking Without Thinking”. In my words the concept may be said to be that we are able to perform tasks as guided by unconscious thinking however we are very poorly equipped to explain what we ACTUALLY did. Mr. Gladwell provides the following as an example:

“One of Braden’s digitized videotapes is of the tennis great Andre Agassi hitting a forehand. The image has been stripped down. Agassi has been reduced to a skeleton, so that as he moves to hit the ball, the movement of every joint in the body is clearly visible and measurable. The Agassi tape is a perfect illustration of our inability to describe how we behave in the moment. ‘Almost every pro in the world says that he uses his wrist to roll the racket over the ball when he hits a forehand,’ Braden says. ‘Why? What are they seeing? Look’ – and here Braden points to the screen – ‘see when he hits the ball? We can tell with digitized imaging whether a wrist turns an eighth of a degree. But players almost never move their wrist at all. Look how fixed it is. He doesn’t move his wrist until long after the ball is hit. He thinks the he’s moving it at impact, but he’s actually not moving it until long after impact. How can so many people be fooled? People are going to coaches and paying hundreds of dollars to be taught how roll their wrist over the ball, and all that’s happening is that the number of injuries to the arm is exploding.’ “(page 67-68).

In the above example we have a description of a population of experts who agree generally that they all do something that they demonstrably do not actually do and claim that this thing is absolutely integral to the success of that thing. The net result of this explanation is not improvement in other people, it is generally suggested that it relates to an increase in injuries in other people. “How can so many people be fooled?”…I may be incorrect but I think I see this in the Osteopathic profession with things such as a description of palpating the cranial rhythmic impulse, attributing dysfunctions to the quadratus lumborum or the psoas with high confidence (which may or may not be true…we don’t know yet), or other things that just don’t have a strong basis in current anatomical information (such as the belief in motion of the spheno-basilar synchondrosis in anyone above the age of 15). What may be going on here? What might be happening with these descriptions? Well, they have to start somewhere! They more likely than not begin with the observation of a phenomenon in a clinical setting that is then displayed to be repeatable while the person observing them does not know why it is happening…but they know something is happening. When attempting to describe what is happening for the purpose of communication to others they come up with some explanation (aka a story) based on the best information they are able to find (not the best information available – this is likely an issue for me as well) and then, in the awe of this new and seemingly controllable clinical phenomenon , the listeners propagate the story. A question I am trying to find insight in to is why Osteopathic practitioners come up with stories that tend to be more far fetched than other professions? Well, the beginnings of the profession were essentially a counter culture begun by a maverick and, as a result, there may have been some mirroring of behavior by others – it MAY be part of the sub-culture of Osteopathy to turn one’s back on the dominant belief systems regardless of compelling information.

Moving past my weak hypothesis as to why Osteopathic professionals seem to come up with more far fetched stories I also see that there are those who, seemingly in opposition, who cling very strongly to small pieces of contentious scientific information and attempt to insult the others with more far fetched stories. Both groups are doing the same thing, clinging tightly to information that isn’t considered all that strong even by the people who have tested it and written the research. Nobody within Osteopathy has a truly strong position as to WHY Osteopathic treatment really works. There are seemingly promising basic physiological mechanisms such as mechanotransduction, vasomotion, axoplasmic flow, muscle spindle reflexes, and others however these still need more study in order to consider them the actual mechanisms as to WHY Osteopathic treatment is able to improve the health state of a patient whether simply on a musculo-skeletal level or on any other physiological level that is yet to be determined.

What seems clear through clinical observation is that a large amount of patients have improved health status after Osteopathic Manual Treatment and, the training received through various institutions and various stories allows for seemingly consistent results for the practitioners and the patients…we just don’t know for sure WHY (YET). Osteopathic Manual Therapy is dominantly gentle and, as such, likely does not heavily engage protective reflexes (such as a muscle spindle reflex or a golgi tendon organ reflex) leading to the capacity to alter joint freedom as well as soft tissue compliance to motion. That seems to be the key difference between Osteopathic Manual Therapeutics and other modalities.

What the heck am I rambling so long for? I want to suggest that there is a danger in continuing to present the stories of how any profession works (especially Osteopathy) as final or as comprehensively explanatory. We all may be better off if we present things as “this is what we understand today”. Begin with “I don’t know” so that we are not blocked in going forwards. I find little useful information for progress within the stories of my chosen profession while, at the exact same time, finding very useful parameters for helping patients right now. The ability to improve practitioner and patient outcomes may hinge on moving away from the old stories of the profession.